Tongue-in-cheek 80’s metal band performed at the House of Blues on August 10th, 2017. Part raunchy music and raunchy comedy show, this is one band to not bring the kids to! Below are photos I did for the show.

Here are photos I did at the House of Blues in San Diego of the San Diego band P.O.D. It was a great show with lots of fans cheering their local band.

Below is a photo I took of Michael Wilton of Queensryche on November 18th, 2016 at the House of Blues in San Diego. I chose this photo to be the picture of the week since it was liked and re-posted many times by fans and Queensryche. Michael even posted it on Thanksgiving when he wished all of his fans a happy holiday.

On the 16th – 18th of September, the second annual KAABOO festival was held at the fair grounds in Del Mar, California. I did photography for the festival. Click here or the image below to see the photos and videos I took.

Here is the video:

I first saw Sevendust open for Creed in 2002. Ever since I have been a huge fan and the band is my favorite “underrated band”. I am so glad they are nominated for a Grammy this year because I want more hard rock fans out there to love them as much as I do.

I first meet the band in 2006 when they headlined a sold out show at the House of Blues in San Diego. Unfortunately they have not headlined a show in San Diego since. In 2011 I hung out with the band on the Shiprocked cruise. On this cruise, founding member Vince Hornsby nicked named me “San Diego”. During one of the Sevendust shows on the ship Vince gave me one of Morgan Rose’s drumsticks which I unfortunately lost later that night in the casino.

During both times I meet the band I learned that not only are they fantastic musicians but really nice, down to earth guys. I even got to meet Lajon Witherspoon’s wife who is super nice too.  There couldn’t be a better group to win at the Grammy’s this Monday. I have my fingers crossed!

At age 67, Rick Nielsen, founding member of the band Cheap Trick is still rocking his fans (as seen in the picture I took in July 2015 below). Cheap Trick has been will be inducted into the Rock and Roll Hall of Fame in 2016.

I first saw Cheap Trick open for Kiss in 1977 (my first major concert). At the time I never heard of Cheap Trick and out came these four guys, two dressed like normal rock stars (Tom Petersson and Robin Zander) and two dressed pretty goofy (Rick and Bun E. Carlos). Rick, being the most energetic of the four, ran around the stage and at one point pushed his guitar off of the riser he stands on multiple times.

The week after the show, I was talking to a classmate, telling him about this goofy band that I saw open for Kiss. While fun to watch, I wrote them off until he told me to check out their latest album because they are actually good musician/ song writers. So I went out and purchased Heaven Tonight and gave it a listen… I have been a huge fan ever since.

Cheap Trick is still rocking hard, so go see them the next time they are in your town. They are still a really fun band to watch!

Drummers get no love when it comes to great concert pics. Why? Well it’s hard to get a good shot since most of the time the drums are setup so you can barely see the drummer. The lighting is usually not great either. The only great drummer pics I’ve been able to do was on stage right next to the drummer. Most big bands, like Queensryche, won’t let photographers do that. I can only get away with that in smaller clubs.

Here is a pic of one of my favorite drummers, Scott Rockenfield, of Queensryche. He is a great guy too! 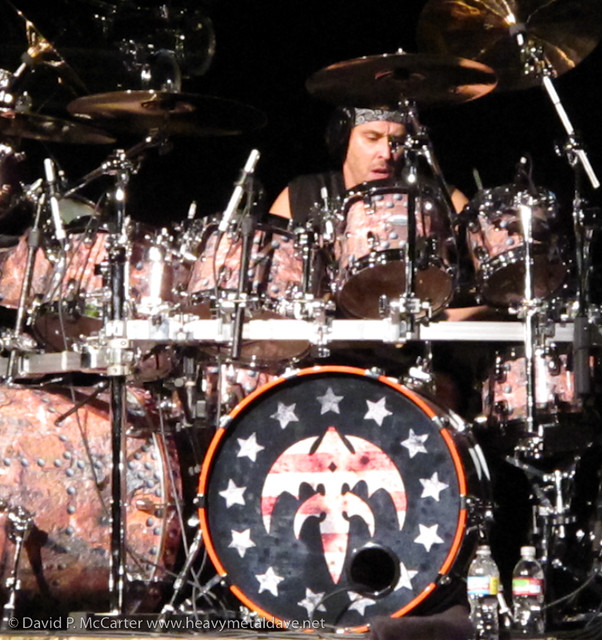